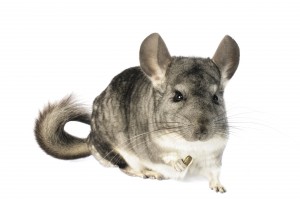 Chinchillas are  South American rodents and a critically endangered species. Their looks, soft fur and long lifespan (they can live up to 20 years) have made them popular pets. Like horses, rabbits and guinea pigs, they have a single stomach and a large caecum that they need to break down and digest their fibrous herbivorous diet. They have a long gestation period (111 days) and produce precocious young with full coats of fur, teeth and their eyes open.

Dental disease is one of the most common problems seen in chinchillas. They have open rooted incisor and cheek teeth which grow continuously (by several inches a year). Overly long teeth, periodontal disease and tooth cavities are all common conditions. Up to 52% of captive chinchillas have been found to have cavities in their teeth. The reason is unknown, but it has been suggested the combination of sugary treats and the reduced abrasion of lower fibre diets on the teeth, lead to reduce salivation and the build up of bacterial plaque on the teeth. Due to their conformation and small mouth size, up to 50% of lesions can be missed on an intra oral examination in a conscious animal. A thorough examination under general anaesthetic is recommended as chinchillas with dental disease often have no difficulty eating and may not show symptoms until severe complications occur.

Dilated Cardiomyopathy, septal defects (holes in the heart) and degenerative valvular disease have all been reported in chinchillas. Heart murmurs are common in young healthy chinchillas with a suggested prevalence of  23%.  It is unknown if these are significant, however the louder the murmur the more likely it is to be significant. An ultrasound is recommended if the murmur is grade 3 or louder. Valvular problems are most common and can be treated in the same way as cats and dogs.

Chinchillas have large tympanic bullae with a short simple ear canal. This makes them susceptible to middle ear infections which can be very challenging to treat. Clinical signs vary from slight discharge and head shaking to a head tilt and severe neurological signs. Confirmation of disease requires x-rays and a sample must be taken for culture to find appropriate antibiotics.

This is a repetitive stereotypical behaviour  where the fur is chewed rather than groomed and leads to a moth eaten appearance. It is precipitated by stress and environmental factors, and treatment is aimed at sorting out these issues.

This is a bacteria which in chinchillas can infect many areas causing conjunctivitis, middle ear infection, pneumonia, septicaemia, diarrhoea, metritis and abortion.

For the latest information on Coronavirus please read our News

Ark Vets now offer Insurance through VetSure, including 5 weeks cover free of charge and we can make direct claims leaving you just to pay the excess. We are excited to be able to offer this to our clients and you can read more details...

Tour of the surgery

Have a look at all the rooms and equipment in the 360 degree tour of the surgery – there is a lot more our the surgery than you expect.

Our Refer a Friend scheme is still running - so if a friend or neighbour tells you about Ark Vets and you then register with us, make sure you tell us who told you and we will give them a voucher worth 30% off an annual cat or dog booster vaccination.